You are here: Home / Be a Better Mom / Educate My Kids Right / August Facts… Did You Know? 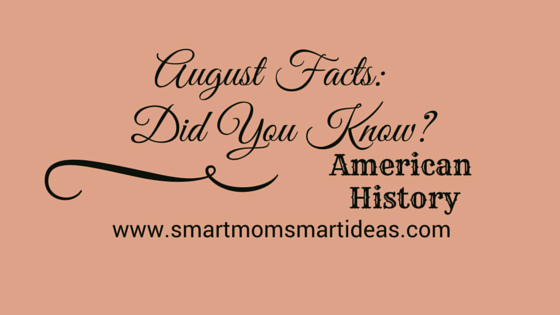 The month of August is filled with many little known and interesting facts from American history. Hope you enjoy this month’s edition of August Facts… Did you know?

August 2, 1776 – Most of the members of the Continental Congress signed the parchment copy of the Declaration of Independence.

August 2, 1876 – Wild Bill Hickok was shot and killed during a poker game in Deadwood, SD.  (Note:  Deadwood, SD is fun place to visit if you have never been).

August 3, 1492 – A little before “American” history, but an important date, Christopher Columbus sailed looking for a shorter route to the West Indies.  On October 12, 1492, he landed in the Bahamas.

August 5, 1845 – The cornerstone was laid for the Statue of Liberty.

August 6, 1945 – The United States dropped the first atomic bomb on Hiroshima, Japan.  A second bomb was dropped on August 9, 1945 on Nagasaki, Japan.  Japan surrendered on August 9th ending the war in the Pacific.

August 8, 1876 – Thomas Edison received a patent for the mimeograph, a machine used to make copies for 100 years until the copy machine replaced it.

August 14, 1765 – The Sons of Liberty protest the Stamp Act under an elm tree in Boston.  The tree became known as the Liberty Tree.

August 24, 1814 – As the British troops moved toward Washington, Dolley Madison saves the portrait of George Washington from the White House during the War of 1812.

August 24, 1932 – Amelia Earhart was the first woman to fly across the United States.

August 27, 1776 – The Battle for Rhode Island was fought during the Revolutionary War.

What are your favorite moments from American history in August?

Sources include – The American Patriot’s Almanac by William Bennett and John T.E. Cribb and The Almanac of American History edited by Arthur M. Schlesinger, Jr.

Previous Post: « Good Character Traits: Teaching Children Honesty in a World that Lacks Integrity
Next Post: Back to School Tips You Can Use »